FOHP, together with a local school and Dorset Wildlife Trust,  have recently put in a new wild flower area in Hamworthy Park.

In an effort to be more successful, we decided to consult the experts. So contact was made with Kew Gardens, Dorset Wildlife Trust and some specialist wildflower seed suppliers.  The main reason for the previous failure, apparently, was inadequate preparation and the location.  It is essential that all existing turf is removed and the patch dug over – removing as many weed roots as possible.  The soil level is then restored using poor quality top soil. Wildflowers grow best in poor soil and it is important not to apply any fertilizer. This is because in fertile soils, grasses and weeds tend to swamp the less competitive wildflowers.

The previous location was adjacent to a hedgerow. This was attractive to nesting birds and sowing seeds there was just like setting up a picnic table for them, so the experts said.

Although it is more expensive, experts advised that the best chance of success would be to use a pre-sown turf of perennial flowers – but sow annual wildflower seed around the perimeter.  A suitable turf was ordered from a specialist nursery near Basingstoke and collection arranged for the 1st April.  The landscape turf we ordered contains up to 31 different perennial wildflower species and two non-invasive grasses.

A few weeks ago, as many park users have noticed, an area was marked out and the FOHP volunteers got stuck in removing the turf. This turf was made use of to infill numerous holes in the grass throughout the park -probably the most strenuous bit of the project – pushing well laden wheelbarrows as far as the Eastern end! The area was dug over and bucket after bucket load of poor garden soil was delivered to the park by ‘the Paddling Pool Van’.

Laura Clark, who runs the gardening club at Twin Sails Infant School, had previously asked if there was anything the children could help with in the park – we thought this would be an ideal project to involve them with.

The soil must be watered to saturation point two days before laying. But as we had had no appreciable rainfall for the previous three weeks, many gallons of water were transported to the park over the weekend and the turf was collected on the Monday. 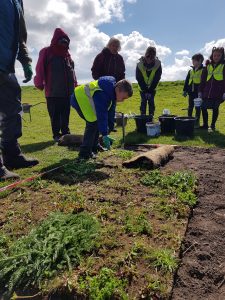 On Tuesday morning another watering was carried out and in the afternoon the children, Molly, Adam and Max, accompanied by Laura Clark and Mrs Henstridge, met us in the park – after a quick rake over, laying commenced.  Katie Wilkinson from Dorset Wildlife Trust  also joined us as this project fits in well with their ‘Get Dorset Buzzing’ campaign which is aimed at saving pollinating insects.  The FOHP volunteers were almost made redundant as the children got stuck in rolling out the turf and bedding it in.  It then received another thorough watering. I think Max thought my shoes were a bit grubby so he watered them as well!  Attention was then turned to the surrounds.  These were raked over then, using homemade applicators (a small plant pot with most of its drain holes blanked off), wildflower seed premixed with fine sand so we could see where it was going was applied to the remaining exposed soil.

They then gently raked that area over. The accompanying photos show the children hard at work and what a good job they did – Thank you Molly, Adam and Max. 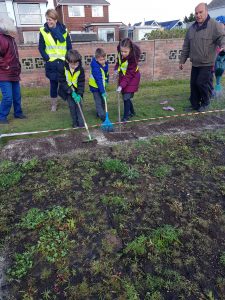