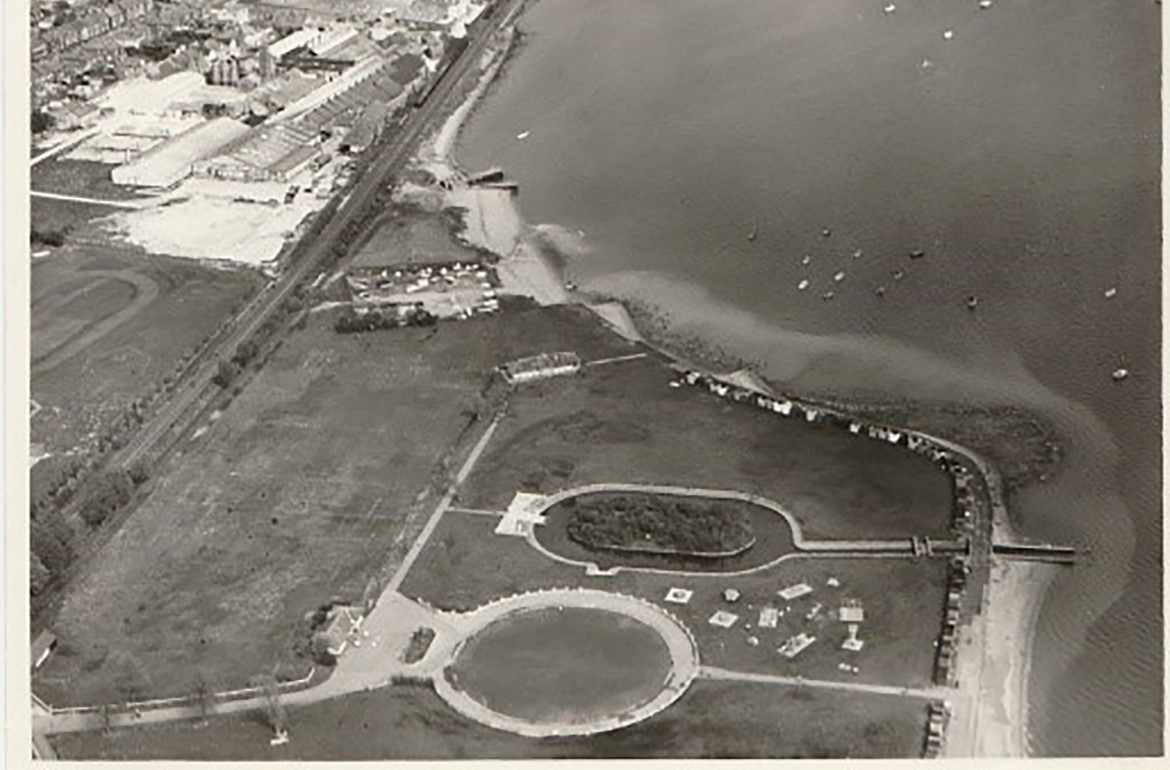 Hamworthy Park was officially opened in 1931, when eighteen acres of marshy land, with tidal lagoons and ditches, were transformed into a Community Park.

It consisted of a café, paddling pool, boating lake, children’s play area and park keeper’s cottage. The northern boundary was formed by the railway line and the western boundary by the pathway that abuts today’s carpark.

During World War II, a temporary road surface was laid from the railway level crossing to join up with the then extremity of Lulworth Avenue. This was needed to allow military vehicles access to HMS Turtle (formerly Lake Camp –more information in regard to Hamworthy and the history of flying boats can be found near the promenade)

Despite wartime restrictions, the park and the beach were very much enjoyed by the community.

Note the Park Keeper’s House (back Left) within the Park’s boundary.

Following the war, ‘Grays Field’ (west of the main pathway leading down to the promenade) was bought by the Council and subsequently converted into an extension of the park.

This addition compensated for the parkland that was lost when a new official road was constructed to join Lulworth Avenue to the railway level crossing. New houses were later constructed alongside the original park keeper’s house (north of the new road). In the 1970’s a miniature railway became a major attraction.
The train went around the boating lake and paddling pool. The train was built by Mr Wilcox and driven by Jeff Yeoman.

Up to 1980, it was possible to walk right to the end point of the Hamworthy Peninsula. It was almost like an extension to the park. However, when the Port Expansion took place, the park’s eastern boundary was clearly re-defined by Poole Yacht Club’s new facility.

During this period, the Boating Lake was removed. Although the boats had long gone, the facility was a favourite adventure play area for older children.

The resident-led Friends of Hamworthy Park group was formed in 1997 to combat the decline and in particular to safeguard the future of the paddling pool. The Friends’ efforts were rewarded and the paddling pool was completely refurbished and converted into a freshwater pool.

The new pool was officially opened by the Mayor, Cllr Bill Wretham in August 1999

During the early 21st century, the Café was completely refurbished and once again became a popular destination.

The Friends of Hamworthy Park now work alongside the Borough of Poole and support the management and upkeep of this Borough Park and help to retain the park’s Green Flag Award which it has held since 2010.